Formula Student 2018 – you were a beauty. In my ten months with Queen’s Formula Racing I’ve probably felt every kind of emotion out there but none came close to the sense of achievement, relief and togetherness that I felt after Sunday’s Endurance event at Silverstone.

Things had been going smoothly for QFR at Formula Student, that was up until Saturday morning, when a fuel leak issue threatened to put us out of Saturday’s events. Once again though, the QFR mechanics diagnosed the problem and had it fixed in time for the Skid Pad and Acceleration events.

At that point, we would have bit your hand off for an event finish, nevermind the ninth-place result that we did achieve. 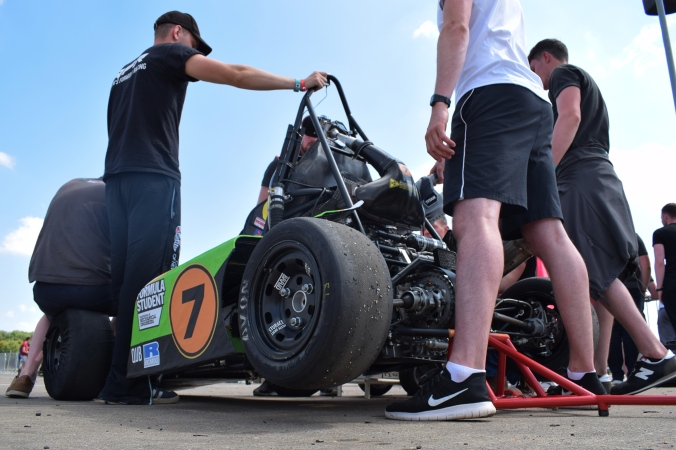 For me, Sunday was my big moment. Stepping into the car that I helped design and build for the endurance event was special. I had never accounted for the nerves that I would experience while waiting on the green flag at the National pitlane exit. Between that and the cocoon of heat inside the QFR18 cockpit it was a long wait until I was able to launch the car off the line.

The nerves were quickly forgotten about, I needed every last bit of concentration to keep QFR’s beloved racecar between the green and yellow cones. It was over in a flash, before I knew it I was hopping out and helping my team-mate into the race seat for the second stint. The speed was phenomenal, the handling ultra responsive and the brakes oozed confidence.

Those 11 laps will be something I’ll never forget, a moment to cherish and a memory to savour.

Completing the event surrounded and supported by a bunch of friends was a great feeling. To finish the event ninth overall and fourth in the UK was the icing on the cake.

On Sunday night’s closing ceremony we were handed the Communications award for the team’s efforts broadcasting its progress through design, build and test processes. For a team 100% made up of engineering students this was a brilliant achievement. Beating over 80 universities to this prize was down to QFR’s passion for engineering and sharing our love for Formula Student and motorsport.

Travelling back home I wondered what the key to QFR’s success might have been.

The first, and likely most obvious, was hard work. Between the 25 team members endless hours were spent through the year designing and manufacturing QFR18. At times the stress was almost unbearable but we were unbreakable, it wasn’t until the Formula Student weekend that we were truly rewarded.

Having a small team might have meant we had to work harder but it also led to an almighty sense of team spirit and togetherness. Craic was had throughout the year but it multiplied during the weekend at Silverstone. In fact, we believed we had so much banter we awarded ourselves a homemade ”Best Craic Award”. Funkyball winning, Geese chasing and tent sinking – all in a weekend’s entertainment.

It really was a weekend to remember.

Before I sign off from this year’s Formula Student coverage I’d just like to thank the fourth years who will be off to pastures new next year. Led by Gavin, they all did a perfect job welcoming the rest of us into the team and including us all in every activity available.

It could have easily been their year and their team but instead they made it our project, our year and one team made up of a bunch of mates. I have no doubt they’ll succeed in whatever career they pursue and I hope they’ll enjoy following QFR’s progress in 2019.

2 thoughts on “Formula Student diary: A weekend to remember”